The band  BELIEVE was established in Warsaw in 2004. Then Mirek Gil, a former guitarist and composer of a legendary group COLLAGE, decided to invite a few his friends to the cooperation and to initiate trials as new staff. Alongside Mirek the band was expanded by two other musicians having experience in buzzing “Collages”. These both were Tomek Różycki, a vocalist being remembered from the first record of Collage “Fairy Tales” as well as Przemas Zawadzki, the co-founder and first bassist of that reputable group. In the line-up there were also a gifted keyboardist Adam Miłosz and a drummer Vlodi Tafel. However a true bull’s-eye was a Japanese violinist Satomi whose phenomenal playing distinguished and made conspicuous the style of BELIEVE’s music for always. Working on their first record “Hope To See Another Day” lasted until 2006 when it was released by Swiss music publishing company Galileo Records. 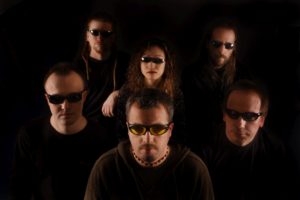 The succeeding year their music and sound was detected by originators of computer game „Wiedźmin”. Consequently the band „Believe” recorded one piece for game soundtrack. Believe gave concerts strenuously, also together with Fish, a legendary frontman of Marillion.

The year 2008 constituted very busy time in terms of releasing music. Believe issued its second record “Yesterday Is A Friend” as well as they took part in a concert in the Silesian Theatre (dedicated to Stanisław Wyspiański) in Katowice  where they played along with such outstanding figures as Par Lindh or SBB and as a result also contributed to a DVD concert album. Unfortunately the vocalist Tomek Różycki and the keyboardist Adam Miłosz left the band after that intense working time. A young and talented vocalist Karol Wróblewski took a microphone over, nevertheless keyboard vanished for some time from the instrumentarium of Warsaw team. They still concertized, both domestically and abroad, oftentimes at the side of Pendragon, Ray Wilson or Daniel Cavanagh. Such above mentioned personalities bear witness that music of “Believe” grew in popularity. It is worth pointing another record “This Bread Is Mine” with lyrics of Robert Sieradzki, a well-wisher.

In 2010 the band kept a strenuous pace and issued a next record – “World is Round”. Crucially, new musicians took part in its recording: Konrad Wantrych as a new keyboardist, Winicjusz Chróst as a guitarist and Tomasz “Ragaboy” Osiecki who played Hindu instruments. Due to those staff changes the music gained a totally fresh climate and dimension.

Commercial and artistic successes entailed a subsequent concert in the Silesian Theatre (dedicated to Stanisław Wyspiański) and recording a DVD “Seeing Is Believing”. And again the Believe set out on a concert journey through Poland, Germany, Belgium and the Netherlands. Finally, as a contemporary crowning achievement the band “Believed” enjoyed participation in the famous music festival “Summers End” in England, being accompanied by such remarkable groups as Moon Safari, Wobbler, The Enid or Manning.

After hard work period musicians took some rest from journeys and focused on fresh material “Warmest Sun In Winter”. Its premiere concert took place overseas at the huge festival RosFest in Gettysburg in the USA. The record itself gained complimentary review and was wholeheartedly accepted and cherished by fans.

The Collage returned concurrently to concert shows and because Mirek Gil was its prop, that is why the Believed again had a year off. In 2015 the Believed broke silence, giving several concerts in Poland and presenting a new single “Veils”. The band was also been energized by two fresh members: Maciej Kosiński, a former vocalist of Votum and a highly talented drummer Łukasz Tomczak. Importantly, in 2016 after successive personal rearragements, the band is formed by:

Yet a vocalist is wanted and looked for. Here he is – Łukasz Ociepa, ex-vocalist of Lodzian formation “Alone” endowed with a very specific voice. In such a line-up the “Believe” recorded the album “Seven Widows”, a premiere of which  occurred in autumn 2017. Nowadays the band is working on new pieces and promotion. Knowing the zeal and stamina of Mirek Gil and his friends we can be confident and expect incoming recordings.